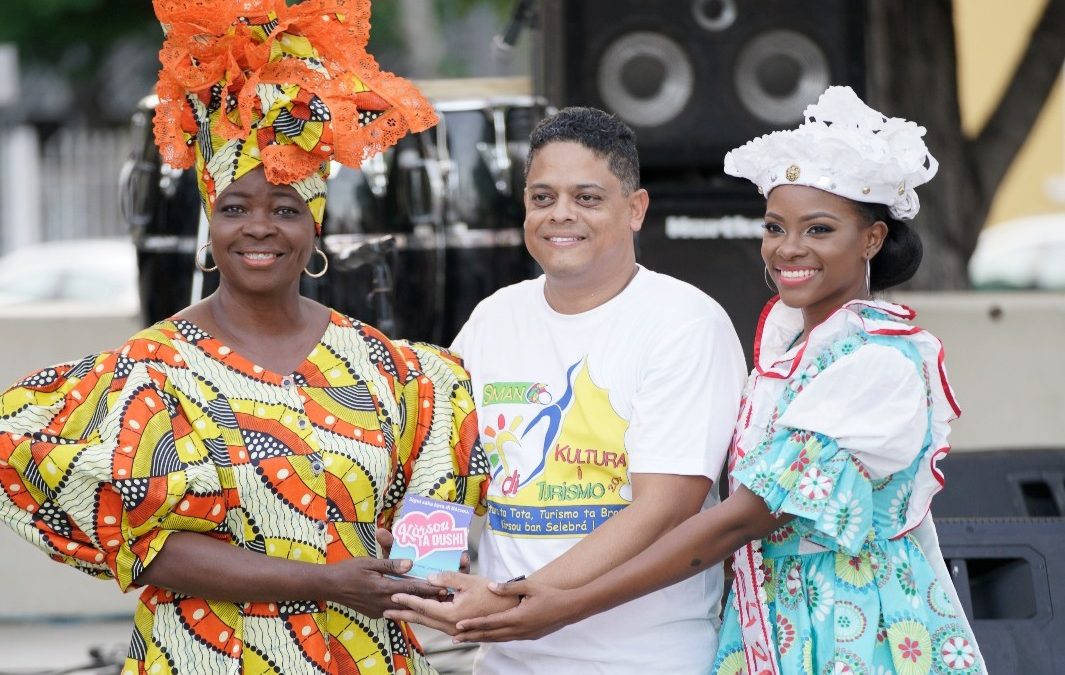 Elia Isenia was recently the recipient of a Trophy of Recognition as a “Baluarte” of Curaçaoan culture from Curaçao Tourism Board (CTB). She received this honor for her tireless efforts as a cultural agent during the past 40 years, educating the public about all facets of the cultures of Curaçao, Aruba, Bonaire, and Sint Maarten. Thus in essence an educator of Dutch Caribbean culture.

Born Filomena “Elia” Isenia in Curaçao in 1957, she is a singer, composer, poet, storyteller and cultural agent. As a cultural agent she has obtained many facts about Curaçao’s traditional culture from the elderly on the island. Among the things she learned from them were the songs the slaves used to sing during their labor.

Elia is often invited to schools and organizations to share her knowledge and she is an authority on all matters of Curaçaoan rhythms like Seú, Tambú and Tumba. In 1991 Elia became the first Tumba Queen of Curaçao and she went on to win the title two more times. She currently holds the record as the only female Tumba singer to have won the title three times.

Elia Isenia has also represented Curaçao abroad on several occasions. Among the destinations where she has done so are Cuba, Venezuela, the Dominican Republic, Ecuador, Suriname and the Netherlands.

She never received any degree to do what she does nor does she need it. She has simply had an interest to know more about Curaçao’s culture from a very young age. She considers herself a Griot, which in West African tradition is a musician who travels from town to town and through music brings people tidings and educates them about their country’s culture and history.

Another recipient of a Trophy of Recognition was Head of Strategic Development at Curaçao Tourism Board, Dino Daal. He received it for his inspiring work in the field of Curaçao tourism. In his PhD / Doctoral thesis at ICUC he addressed the topic of the involvement of the Curaçaoan people in the development of tourism on the island and he is currently the only Curaçaoan to have obtained a Doctorate in the field of tourism.