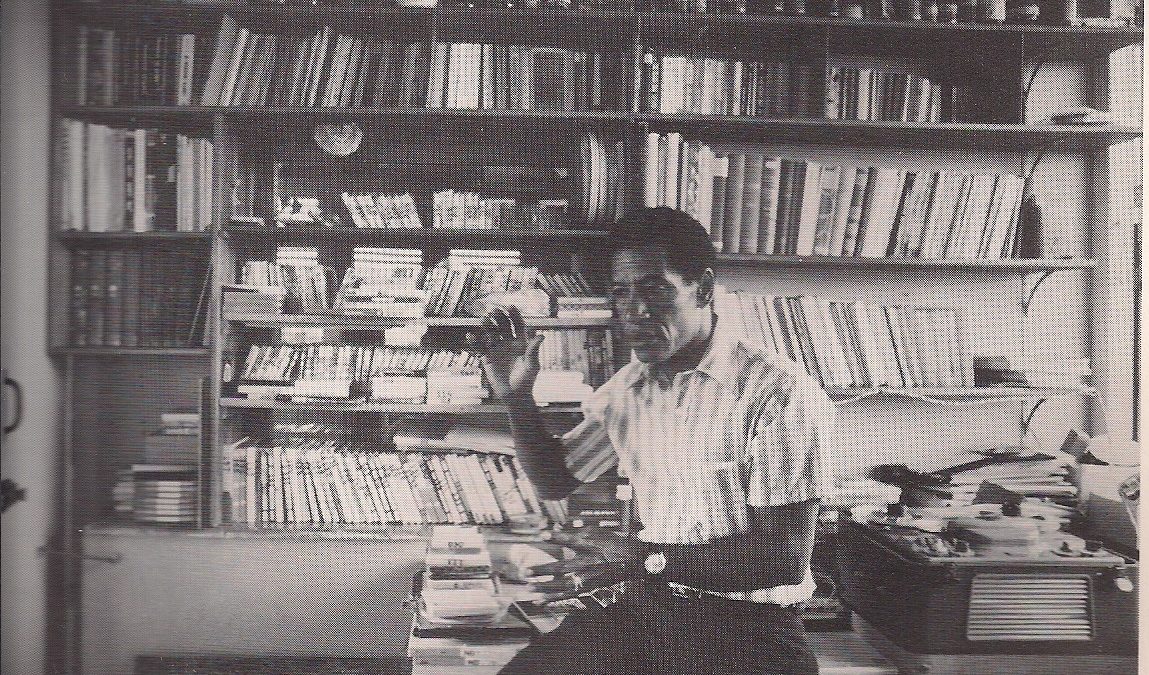 Elis Juliana (Curaçao, August 8th 1927 – Curaçao, June 23rd 2013) was a force of artistic and scientific brilliance. He is widely acknowledged as one of the ‘big three’ of the Curaçaoan art of poetry in Papiamentu – the other two are Pierre Lauffer and Luis Daal – but he was much more than that.  He was also an anthropologist, documentalist, philosopher, educator, ethnomusicologist, archaeologist, declaimer, writer and poet, painter and sculptor. He was Curaçao’s very own Renaissance man.

He was born into a family of humble means and grew up in the neighborhood of Nieuw-Nederland. From a very young age he was curious about all that he surveyed. Even the most minute details of everyday life, such as the ants crawling around in the yard in front of his house, fascinated him.  This relish of life’s simple pleasures would go on to determine his writing style, which was simultaneously simplistic and profound.

As a boy he sang in the choir of Zingende Jeugd (Singing Youth) in Pietermaai and the church choir at the church of Pietermaai. He went to the St. Jozef elementary school and subsequently the St. Jozef craft school where he studied to become a specialized technician. But after a while his family couldn’t afford the school and Elis Juliana quit school to go work to help his mother at home.

At the age of 15 he found work as a mechanic at the barracks of the marines where he quickly learned the trade. Already from that age he started writing letters and poems for his friends who wanted to impress girls who were their object of affection. And already from that age he had a voracious appetite for reading, gosling up every book or magazine he came across whether they be in English, Spanish or Dutch.

At the age of 18 he entered into obligatory military service where he stayed for a year before going to work at what is now the Curaçao Drydock Company. From there he worked a series of jobs, including a stint as a policeman, ‘a little bit of everything’ at Hotel Piscadera, as a prison guard and as a clerk at the Juvenile Justice Service, which would later become the Bureau for Culture and Upbringing. All of these professions gave him ample opportunity to observe many Curaçaoans from all walks of life and this would greatly influence his artistry and scientific approach.

As an archaeologist he also did important work alongside his good friend Father Paul Brenneker, unearthing many important sites and artifacts of Curaçao. A floor dedicated to ethnology in the Curaçao museum houses some of the artifacts they found. His interest in Curaçaoan artifacts also lead to his foundation of Fundashon Zikinzá, of which the collection is now stored at the Central Historical Archives in Scharloo.

As a writer and poet he made many sharp observations of Curaçaoan society and made predictions that later came true, such as in his 1982 poem Bola in which he predicted the closure and departure of Shell Refinery three years before it actually happened in 1985.

Elis Juliana broke many grounds and influenced a great deal of people both in the sciences and the arts. His work also received several accolades, among them the Cola Debrot prize, and the José María Heredia prize in Cuba (which is a national prize of poetry there). He was also a knighted in the Order of Oranje-Nassau and received the highest Dutch cultural award, the Silver Carnation, for all of his work for the preservation of Curaçaoan culture. On June 18th 2013 he received an honorary doctorate from the University of Curaçao, just five days before he passed away on June 23rd.

It was no wonder that Elis Juliana was often referred to as “Ompi Elis” (Unce Elis) because he truly was a great soul who made our dushi Curaçao more dushi. In honoring him we honor the best in ourselves. May his legacy live on forever.