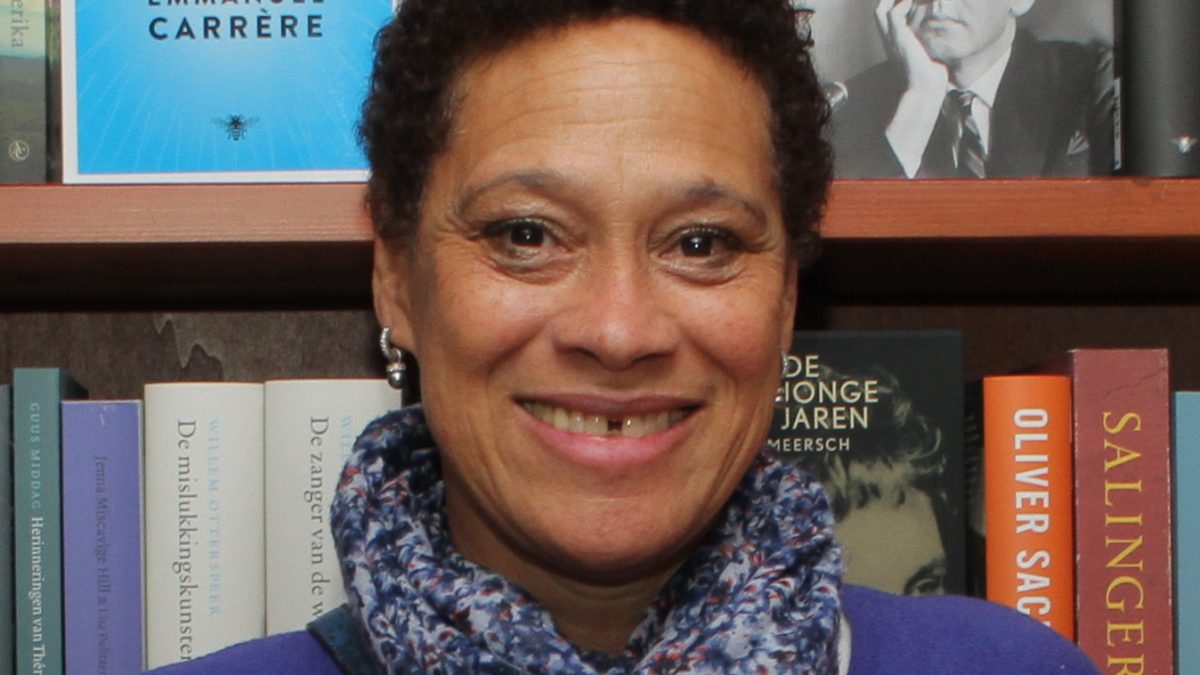 Enith Brigitha is a Curaçaoan retired competitive swimmer who competed for the Netherlands in the Olympic Games of 1972 and 1976, where she won several medals. This made her the first person of color to ever have won an Olympic medal.

A book titled ‘Enith Brigitha. Zwemmen in de schaduw van doping’ (Enith Brigitha. Swimming in the shadow of doping), which details her international career, was released in September of 2017 and was written by Jeannette van Ditzhuijzen. Enith Brigitha is currently in Curaçao promoting it.

She presented a copy to minister Marylin Alcalá-Wallé and on Wednesday October 18th, she signed her books at Samson. On Saturday October 21st, she will hold a book signing at Bruna, Zuikertuin Mall, starting at 11 PM.

Born Enith Sijtje Maria Brigitha in Curaçao (April 15th, 1955), Enith Brigitha learned to swim in the sea and that is also where her career started. At the age of 13 she won her first race, a 2,5 kilometer swimming competition at Spanish Waters. She won this race three years in a row and between 1967 and 1970, she represented the Netherlands Antilles at the Kingdom Games where she won two gold and two silver medals.

At the age of 15, she moved to Amsterdam with her mother and four brothers. She worked as a salesgirl at a warehouse and joined the swimming club ‘Het Y.’ In 1972 she became the first Dutch swimmer to complete the 100 meter freestyle in less than a minute and between the years 1972 and 1979 she was consistently the Netherlands’ female swimming champion.

But she did not compete in freestyle alone. She also excelled at the backstroke, butterfly and the individual medley. She collected a grand total of 21 national titles in the Netherlands.

Enith Brigitha displayed her prowess on the international stage as well. At the 1973 and 1975 World Championships, she helped the team of the Netherlands win one silver medal and four bronze medals. In addition, she also represented the Netherlands at the 1972 Olympic Games in Munich and the 1976 Olympic Games in Montreal, where she won the bronze medal in the 100 meter and 200 meter freestyle.

At the 1976 Olympic Games, she came in third behind two swimmers from East Germany. It was revealed in 1990 that the government of this country systematically administered doping to their athletes, including the swimmers who won gold and silver in Enith Brigitha’s races, during many international tournaments and championships in the 1970s.

In light of this revelation, many athletes demanded Brigitha be awarded the gold and silver she deserved in the 100 meter and 200 meter freestyle. Unfortunately, this never happened.

Despite this controversy, Enith Brigitha can look back on an illustrious career in which she was named Dutch Athlete of the Year in both 1973 and 1974. In 1979 the Dutch queen appointed her as Knight in the Order of Oranje-Nassau, a title bestowed on Dutch citizens with exceptional accomplishments within their fields. She also received honors for her career successes from her native island of Curaçao. In april of 2017 the swimming facility at SDK was officially named ‘Pisina Enith Brigitha’.

Curaçaoan athlethes who have accomplished so much in their fields are one of the many reasons we should be proud of our island nation. For this reason we want to thank Enith Brigitha for all she has done to elevate Curaçao’s stature on the global stage.